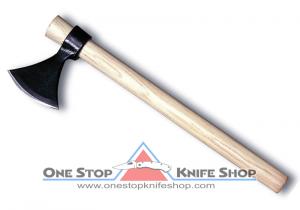 Part Number:CS-90N Be the first one to write a review
$27.93 Reg. Price $41.99   You Save $14.06
COLD STEEL 90N NORSE HAWK - Capturing the Viking spirit, the Norse Hawkâs 4" blade features a highly curved cutting edge and terminates in two sharp points. These points increase the chance of a stick when the Norse Hawk is thrown.
Tweet

During the 10th century, the long ships of Viking raiders were an all too familiar and dreaded sight. Ranging as far north as Russia and as far east as Constantinople, the Vikings wielded their terrible , fearsome battle ax. This weapon was brutally effective in close combat, capable of delivering devastating blows, shattering shields and literally "disarming" an adversary.

The influence of the Viking weapon indeed far out-lasted the reign of terror of the Vikings themselves. Its sleek lines and brute strength may been seen today in axes, hatchets and tomahawks.

Nobody has captured the Viking spirit and produced a weapon so true to its origins as Cold Steel. The Norse Hawk is drop forged out of incredibly strong 1055 carbon steel guaranteed against breakage. Its 4" blade is designed with the cutting edge highly curved to facilitate deep, slashing cuts and terminates in two sharp points which are useful in hand-to-hand combat. The bottom point may be used to capture an opponent's shield, leg, arm, shoulder or neck, momentarily immobilizing him or bringing him closer so that he may be dealt with easier. The top point may be used to execute quick, direct chops or with a thrusting motion to pierce or gouge. It also increases the chance of a stick when the Norse Hawk is thrown, even with a slight over rotation.

Lightweight and very effective, the Norse Hawk is easily wielded by men and women of all sizes and ages. Its sturdy, straight grained hickory handle provides long, durable service. As a weapon, the Norse Hawk is like its ancient Viking ancestors, merciless.