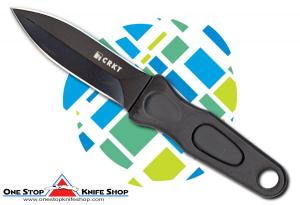 Part Number:CR-2020 Be the first one to write a review
$46.88 Reg. Price $74.99   You Save $28.11
CRKT 2020 A.G. RUSSELL STING - Conceived as a hunting and personal defense knife by A.G. Russell, this little hot-forged fixed blade is the toughest knife we have ever made. When A.G. designed the first Sting in 1975, he intended it as a boot knife for hunting and personal defense. His very popular all-steel version in 1977 carried the idea a step further. We see today's CRKT Sting as a multi-purpose one-piece utility knife that is just about indestructible.
Tweet

The CRKT Sting: Originally conceived as a hunting and personal defense knife by A.G. Russell, this little forged fixed blade is the toughest knife we have ever made.

Say “A.G. Russell,” and you have to immediately say “first,” because this living legend was one of the inventors of the modern knife industry. But despite all his awards and achievements, A.G. is first of all a knifemaker. We are proud to offer a Columbia River Knife & Tool (CRKT) production version of his Sting, complete with a custom Cordura®/Zytel® sheath.

When A.G. designed the first Sting in 1975, he intended it as a boot knife for hunting and personal defense. His very popular all-steel version in 1977 carried the idea a step further. We see today’s CRKT Sting as a multipurpose one-piece utility knife that is just about indestructible.

Hot forging is the reason the Sting is so tough. It begins life as an ordinary blank of 1050 carbon steel, similar to the alloy used in traditional Samurai swords, which is first hot forged and then precision ground into final shape. After heat treating and normalizing to improve the grain structure, the Sting is then heat treated and quenched to achieve hardness, and tempered to arrive at an optimum hardness with excellent strength.

While they are very tough, low alloy steels do not have the rust resistance imparted by the chromium and nickel in stainless steels, so we apply a black non-reflective powder coat finish to stop corrosion.

The integral handle is contoured to fit the bare or gloved hand nicely and provides heft and balance, with thumb detents for grip. A large lanyard hole is provided, allowing the use of a wrist lanyard, or carry as a neck knife.

We have also created a new Cordura® multi-carry sheath with a Zytel® liner. This quiet and strong design allows the Sting to be carried in a variety of carry positions on trousers, belts or gear.

We never recommend mistreating a knife, but as a survival knife, the Sting can take more outright abuse than any stainless steel knife we make. You can use it to cut wood, clean and skin animals, and even for those unforeseen digging and prying tasks.

As a personal carry, the Sting is a more hefty knife than our other small fixed blades, which many say adds a sense of security.

Like A.G. Russell himself, the Sting is a tough character that has earned its respect.