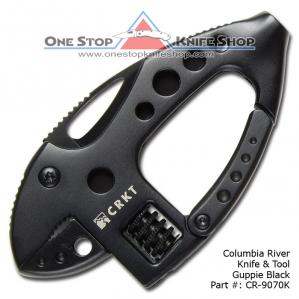 Here at Columbia River Knife & Tool® (CRKT®) we’re inspired by great design. Our I.D. Works™ products are not tools you will find anywhere else. We’re motivated by design that is both inspired and functional, as created 500 years ago by painter, sculptor, architect, and inventor Leonardo da Vinci, who said “observe everything” in nature. We’ve partnered with the best and brightest designers of today who share this vision of putting functional art in your hand. They are organic and ergonomic shapes, sometimes whimsical, alway useful. These unique tools make up our growing I.D. Works™ line. Put them to use, enjoy them, and always remember what inspires you!

The patented* Guppie™, designed by Launce Barber and Tom Stokes, was voted the Best Buy Of The Year at the 2007 Blade Show & International Cutlery Fair, sponsored by Blade Magazine, held June 8 to 10, 2007, in Atlanta, Georgia.

Tom and Launce say, “The Guppie™ was born from the need for a small, pocketable wrench-based tool that could tackle small- to medium-sized jobs. The name comes from its fish-like form.” That Launce and Tom were able to pack all the other Guppie features— knife, carry carabiner, screwdriver, bottle opener, bit carrier, hex bits and LED light— into this small package is a tribute to their sophisticated engineering ability.

The Guppie’s adjustable wrench jaw opens to ½”, making it a handy tool for light assembly and repair, and a very useful emergency tool in the home, office, or outdoors. The Guppie’s 2.0” high-carbon stainless steel blade can be opened and closed with one hand.

The Guppie’s bead-blast stainless steel body features a carabiner shape, which allows it to be carried on belt loops, D-rings, packs or rope. (It is not intended as a weight-bearing climbing carabiner.) The carabiner detent is ingeniously designed to open bottles and metal jar lids, a very useful feature when camping.

New for 2009 is the Black-on-black Guppie Model 9070K, which features a black-out tactical color scheme.

The Guppie’s removable injection-molded bit carrier uses two locating bosses and a powerful magnet to hold it to the side of the Guppie securely. One end of the carrier features a tiny but powerful LED flashlight, while the other end has a hole for a ring, allowing it to be carried separately as a key chain fob, for example.