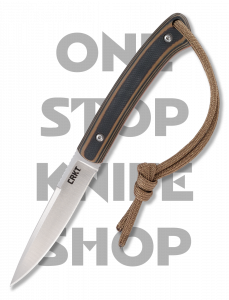 A featherweight build for whatever ends up on the camp menu. When even just the slightest extra weight matters, the Biwa™ /bee-wah/ lightweight hunting and fishing fixed blade knife is choice. At only 1.6 ounces, it tucks away as inconspicuously as a few extra dry flies but comes out swinging when a high-alpine trout hits your line.

Designer Alan Folts of Melbourne, Florida created the custom knife that was to become the Biwa™ after weathering pressure from his minimalist hunting friends to create a do-it-all hunting knife that weighs as little as possible. Named after a species of Japanese trout, the Biwa™ hits the mark.

The long distal taper on the satin-finished blade is a powerhouse for paring, capping, and more. When met with the checkering on the G10 handle, it’s crafted so that you’ll know just where the blade is even if the whole knife sinks out of sight. A strong, injection-molded sheath lashes easily to a pack or quickly becomes a neck knife.

Creatures of the wilderness, beware.